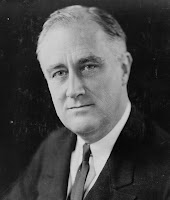 The Act of October 6, 1917, The Trading With the Enemy Act.  Congress amended the the definition of the enemy to include the American people on March 9th, 1933.  Thereby making our status as the enemy no different than the German's during WW1.  As you read the Proclamations below, you will see the reference to the Act of October 6, 1917 as amended.  Now you know what part of the act was amended.

Proclamation 2039 - Declaring Bank Holiday
March 6, 1933
By the President of the United States of America
A Proclamation
Whereas there have been heavy and unwarranted withdrawals of gold and currency from our banking institutions for the purpose of hoarding; and
Whereas continuous and increasingly extensive speculative activity abroad in foreign exchange has resulted in severe drains on the Nation's stocks of gold; and
Whereas those conditions have created a national emergency; and
Whereas it is in the best interests of all bank depositors that a period of respite be provided with a view to preventing further hoarding of coin, bullion or currency or speculation in foreign exchange and permitting the application of appropriate measures to protect the interests of our people; and
Whereas it is provided in Section 5 (b) of the Act of October 6, 1917 (40 Stat. L. 411), as amended, "That the President may investigate, regulate, or prohibit, under such rules and regulations as he may prescribe, by means of licenses or otherwise, any transactions in foreign exchange and the export, hoarding, melting, or earmarkings of gold or silver coin or bullion or currency . . ."; and
Whereas it is provided in Section 16 of the said Act "That whoever shall willfully violate any of the provisions of this Act or of any license, rule, or regulation issued thereunder, and whoever shall willfully violate, neglect, or refuse to comply with any order of the President issued in compliance with the provisions of this Act, shall, upon conviction, be fined not more than $10,000, or, if a natural person, imprisoned for not more than ten years, or both . . .";
Now, Therefore I, Franklin D. Roosevelt, President of the United States of America, in view of such national emergency and by virtue of the authority vested in me by said Act and in order to prevent the export, hoarding, or earmarking of gold or silver coin or bullion or currency, do hereby proclaim, order, direct and declare that from Monday, the Sixth day of March, to Thursday, the Ninth day of March, Nineteen Hundred and Thirty-three, both dates inclusive, there shall be maintained and observed by all banking institutions and all branches thereof located in the United States of America, including the territories and insular possessions, a bank holiday, and that during said period all banking transactions shall be suspended. During such holiday, excepting as hereinafter provided, no such banking institution or branch shall pay out, export, earmark, or permit the withdrawal or transfer in any manner or by any device whatsoever, of any gold or silver coin or bullion or currency or take any other action which might facilitate the hoarding thereof; nor shall any such banking institution or branch pay out deposits, make loans or discounts, deal in foreign exchange, transfer credits from the United States to any place abroad, or transact any other banking business whatsoever.
During such holiday, the Secretary of the Treasury, with the approval of the President and under such regulations as he may prescribe, is authorized and empowered (a) to permit any or all of such banking institutions to perform any or all of the usual banking functions, (b) to direct, require or permit the issuance of clearing house certificates or other evidences of claims against assets of banking institutions, and (c) to authorize and direct the creation in such banking institutions of special trust accounts for the receipt of new deposits which shall be subject to withdrawal on demand without any restriction or limitation and shall be kept separately in cash or on deposit in Federal Reserve Banks or invested in obligations of the United States.
As used in this order the term "banking institutions" shall include all Federal Reserve Banks, national banking associations, banks, trust companies, savings banks, building and loan associations, credit unions, or other corporations, partnerships, associations or persons, engaged in the business of receiving deposits, making loans, discounting business paper, or transacting any other form of banking business.

Proclamation 2040 - Bank Holiday
March 9, 1933
By the President of the United States of America
A Proclamation
Whereas, on March 6, 1933, I, Franklin D. Roosevelt, President of the United States of America, by Proclamation declared the existence of a national emergency and proclaimed a bank holiday extending from Monday the 6th day of March to Thursday the 9th day of March, 1933, both dates inclusive, in order to prevent the export, hoarding or earmarking of gold or silver coin, or bullion or currency, or speculation in foreign exchange; and
Whereas, under the Act of March 9, 1933, all Proclamations heretofore or hereafter issued by the President pursuant to the authority conferred by section 5 (b) of the Act of October 6, 1917, as amended, are approved and confirmed; and
Whereas, said national emergency still continues, and it is necessary to take further measures extending beyond March 9, 1933, in order to accomplish such purposes:
Now, Therefore, I, Franklin D. Roosevelt, President of the United States of America, in view of such continuing national emergency and by virtue of the authority vested in me by Section 5 (b) of the Act of October 6, 1917 (40 Stat. L. 411), as amended by the Act of March 9, 1933, do hereby proclaim, order, direct and declare that all the terms and provisions of said Proclamation of March 6, 1933, and the regulations and orders issued thereunder are hereby continued in full force and effect until further proclamation by the President.
In Witness Whereof, I have hereunto set my hand and have caused the seal of the United States to be affixed.
Done in the District of Columbia, this 9th day of March, in the Year of our Lord One Thousand Nine Hundred and Thirty three, and of the Independence of the United States the One Hundredth and Fifty-seventh.
FRANKLIN D. ROOSEVELT
By the President:
CORDELL HULL
Secretary of State.